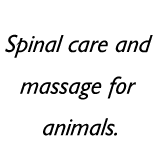 I hold my Master of Science degree, gained from the McTimoney College of Chiropractic near Oxford. I am also an Equine Body Worker and I am fully insured.

Until recently, I was living in Portugal, dividing my time between McTimoney treatments and running the family livestock farm. I am now based back in Dorset, although I do still travel to Portugal to treat clients.

I grew up around animals, originally on a cattle ranch in Kenya and then the main part of my childhood on a small holding in North Dorset. I attended the Portman Pony Club for many years, competing in all disciplines including representing the Portman Pony Club in the Prince Philip Games.

I have worked in mixed discipline yards both in the UK, Portugal, Australia and New Zealand as well as working as a jillaroo (cowgirl) on a remote Australian cattle station.

My family have always had dogs, and I now have two of my own called Stella and Loki and two rescue cats called Gin and Tonic. Currently, due to recently moving back to the UK, I do not have my own horse but this will change shortly.